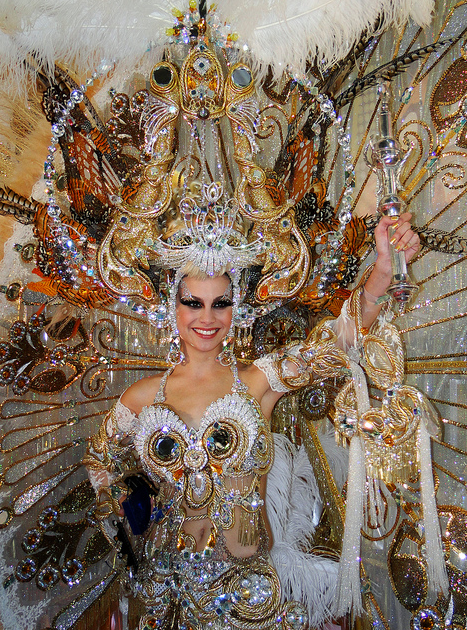 Think of February and you always think of a cold, sombre month but that image has nothing to do with February in Tenerife, where, as well as enjoying spring temperatures, they celebrate one of the funniest parties in the world: Carnival. The colour, the music and, above all, the good atmosphere and safety, make this an unmissable event for anyone who loves having fun and I mean FUN.

Santa Cruz de Tenerife Carnival is a Festival of International Tourist Interest and is undoubtedly the most famous, with its galas and competitions between the different groups, the crowd-pulling dances every night and the Day Carnival, perfect to enjoy with the family. Although other municipalities on the Island also join in the party and celebrate their own smaller carnivals. The key to experiencing Carnival one hundred per cent is to get dressed up and let the reigning revelry and joy carry you away….

If you have not experienced the Carnival in Tenerife before, it is not unusual to get a bit confused when choosing the best dates to come to the island and enjoy this party to the full. Here are some important details that will help you to plan.

Although the official Carnival begins with the contests between the different groups (murgas, comparsas, rondallas), the real show begins with the Gala to elect the Carnival Queen. The event always falls on a Wednesday, and two days later, on Carnival Friday, the streets overflow with joy at the colourful, light-hearted Opening Cavalcade. You should be on the island for this.

From that same night the streets of downtown Santa Cruz are filled with music and costumes. Although this is not an official figure, maybe only one person in a thousand or ten thousand will be at those dances in normal dress. So if you want to go unnoticed among the crowd, get a disguise as soon as you can.

It is normal to meet groups of hairy men dressed as cheerleaders or someone wearing a spectacular costume inspired by a fantastic film. In fact, there are as many disguises as people taking to the streets to enjoy themselves, running into the hundreds of thousands and I’m not exaggerating. Did you know that Santa Cruz holds the Guinness Record for the number of people dancing under the stars? It happened in 1987 when Cuban salsa star Celia Cruz got a crowd of over 250,000 to shake their hips in the central plaza and surrounding areas (the figure remains unbeaten).

For almost two weeks of Carnival, in Santa Cruz a charming mix of good fun and craziness is unleashed – another thing that make this party unmistakable. This is in spite of the huge crowd that meets at the dances of by night and the Day Carnival, which by the way is ideal for the whole family.

On Carnival Tuesday, the Grand Parade, El Coso, along Avenida Anaga represents the high point of the celebrations. The procession attracts hundreds of thousands of attendees including those taking part in the cavalcade and the public.

The night of Ash Wednesday is another date for your diary. The Burial of the Sardine is by far the most amusing funeral you will ever attend in your life. The finishing touch to the “sad” event is a massive dance in the streets of Santa Cruz until the wee hours of the morning.

And then the following weekend (called Piñata), the dances transform the city again with the Day Carnival and the night dances. But everything that begins must end and on Sunday the party says good bye until the following year … but only in the capital. Many other places on the island are about to start their own peculiar carnival, just as lively and surprising.

Join in and mingle with the crowds

It is really easy to join in the carnival atmosphere. It’s as simple as getting g yourself a costume that suits your taste. You can find disguises at affordable prices in specialty stores, which offer whatever you need to become a superhero, gladiator or sexy nurse, including wigs, ornaments and all kinds of extravagant makeup.

Just add one more ingredient: your desire to have fun. Fool around by exaggerating the character that you are playing in your fancy dress. The key is to laugh and make people laugh with your feather boa, your huge fake eyelashes and your glittering face. That’s all!