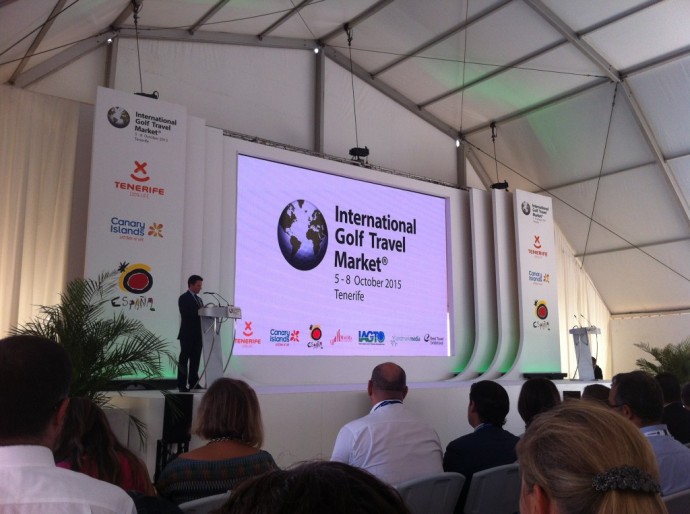 Ten years after hosting its first International Golf Travel Market (IGTM), the world’s premier global event for golf tourism suppliers, buyers and media returns to The Canary Islands, in Spain providing a platform for the region to showcase its development as one of Europe’s leading golf tourism destinations.

The 2015 edition of IGTM, which takes place in Tenerife, the largest and most populous Canary Island, at The Magma Conference Centre from October 5-8, 2015, will highlight the importance of golf tourism in the region.

Since IGTM was last staged in The Canary Islands in 2005, the number of rounds played by golf visitors has also steadily increased, with Gran Canaria recording close to 165,000 rounds per annum, while Tenerife surpassed 300,000, based on 2014 figures.

“Many of Tenerife’s courses are now recognised in numerous rankings and the 2015 edition of IGTM will provide further evidence that the region’s many golf courses and resorts, along with the year-round climate, are collectively creating one of Europe’s leading golf destinations.”

Peter Grimster, IGTM Exhibition Manager, commented: “The decision to return to The Canary Islands and host the 2015 IGTM in Tenerife, reflects the crucial role tourism plays in the region, alongside its overall contribution to the wider Spanish economy.”

“For The Canary Islands to continue to experience growth in golf visitor numbers is a notable achievement and underlines how attractive the islands have now become to golf travellers from across Europe and beyond.”

María Teresa Lorenzo, Minister of Tourism, Culture and Sports at the Regional Government has stated: “The Canary Islands have a clear advantage over other golf destinations: their great climate makes it possible to play 365 days a year.”

“This fact, together with our wide hotel offer have made us a perfect spot for golfers, with all the advantages of a destination which is part of the European Union and easily reachable from the main European cities.”

According to the latest figures from Turespaña, golf accounted for more than 986,000 foreign tourists visiting Spain in 2014.  Marta Blanco, General Director of Turespaña, commented: “Turespaña fully supports the celebration of key events within the golfing calendar and is looking forward to welcoming IGTM to Tenerife.”

More than 450 companies have committed to exhibit at IGTM 2015, highlighting the event’s broad appeal as an established meeting place for golf tourism professionals from across the globe. In addition, 1,450 individuals, representing national and regional golf tourism organisations, leading resorts and golf courses attended the event in 2014, with a similar number expected to visit Tenerife in 2015.