Plan for any day in Tenerife : get together a group of friends and enjoy Mount Teide National Park. The seven of us , wanted to walk but also see Tajinastes (Tower of Jewels) blossom, so instead of getting there on  our own, we decided to hire a guide and avoid walking without specific direction and enjoy explanations about  flora, fauna,  legends…. Our guide: Félix de la Rosa from  Oditen

Felix picked up us with his car  in La Laguna and at  08.15 h already we were on our  way to  Teide National Park, making a brief stop for a coffee.

Enjoying the sea of clouds as we were getting closer to the Parador Nacional del Teide, our starting point , Felix was answering our doubts and questions about our circular medium – high difficulty, whose duration was estimated in  5 hours (as I was not very fit, it took  me at least one extra hour)

Once in our starting point, we  commented  the circular route from Mount Teide Parador  with the following map we had previously received, along with information by e mail.

The heigh difference of this circular route is 500 m,  from 2200m to 2700m. In the first part, our  ascension, we enjoyed the Tajinastes that dotted the landscape in  red and whose bloom,  Felix said , that  takes a process of a month and a half, but whose peak only lasts for two weeks .Quite a visual spectacle that is one more excuse to go up to Mount  Teide Park with a guide.

We went through the Canada del Capricho, one of the areas where climbing is permitted in the National Park, with their gorgeous white and red shades, full of curious holes that should fascinate climbers.

We continued walking up through Degollada de Guajara, stopping us to enjoy a grey Chaffinch singing, which seemed to be there waiting for us to attend to its concert  and that instead of flying,it sang for us. Amazing!

We finally finished our ascent at a point from which the views of  LLano de Ucanca with Mount Teide just in  frontof us,  widely compensated the effort.

We made a break in where, long time ago, it had been refuge for goat herders, which also served in the 19th century as a place for astronomical observation and where you can find a box with agendas that are used  as  guestbooks. Among others, Raúl Socorro, from Cio Sport & Travel also left evidence of his visit. 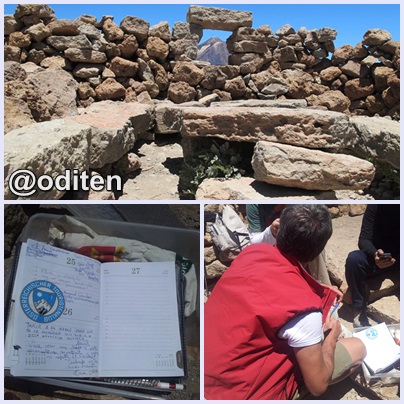 After listening to  the legend of Guajara, we began to descend by the Ucanca Valley, but not before a last look to  a panoramic view of Llano de Ucanca.

During the  descent it was almost  when I more valued having a guide by me. While the  way up  was also busy and well signposted, the descent required much more attention, though  I don’t  suffer from vertigo, easy  was to  slip or give a stumble in a soil of sand or with a lot of stones, but that surprised us with a Mount Teide violet.

And so we kept  walking back to Parador,  always supervised by Felix . Done! … Although I  was the last arriving.

No, here does not end our day. Felix took us by Vilaflor to the Midlands area of Adeje to eat in a guachinche, El Dornajo in Ifonche. €15 per person (not included in the activity) with escaldón, rabbit, potatoes, wine, beer and water in plentiful quantities.

We returned to La Lafuna from  the South, tired but immensely happy after a fab day.

If you decide to do the same thing  with your group of friends contact Félix at oditen@gmail.com or visit his website Oditen

. Prices vary depending on the duration and difficulty, the one I’ve related in  this post had a price of € 30pp, including transportation, but not the food.

In addition Oditen services adapt to what you want, from routes to take pictures, to cultural tours combined with simple trips of short duration and low difficulty. You just ask and  Felix  will take care  of your day in Tenerife to make it such an unforgettable experience.