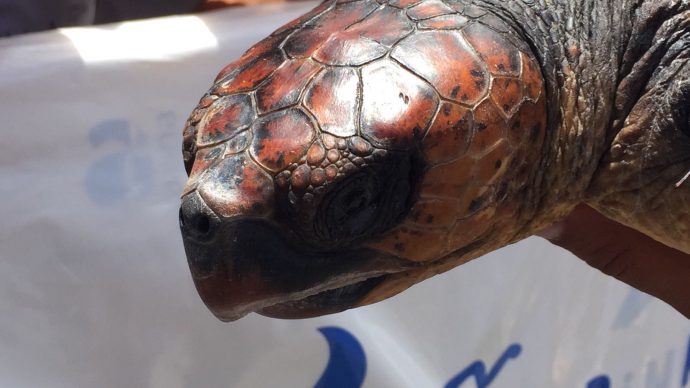 The loggerhead sea turtle (Caretta caretta) with the name “Viky” has returned to its natural habitat, the sea, in an act of turtle release held in the island’s largest protected marine area, the Special Conservation Area of Teno, within the European network „Natura 2000“ and the World Environment Day celebrated on June 5th.

A vessel belonging to the ACEST, a collective of whale watching companies committed to sustainability criteria, left from the Port of Las Galletas, in Arona, to the high sea, where Viky returned to its natural environment.

Vicente Dorta, CEO of the Tenerife Tourism Board, thanked personally the tourism sector for its commitment protecting biodiversity, as well as the positive role that tourism plays in the conservation of valuable areas and wild species, in line with the commitment of the Government of Tenerife (Cabildo de Tenerife) to promote sustainable development.

Viky had suffered severe damage, so she had to go through a recovery process developed at the La Tahonilla Wildlife Centre, which depends on the environmental area of the Cabildo de Tenerife.

The loggerhead sea turtle is, along with the hawksbill turtle, the leatherback sea turtle and the green turtle, one of the species you can see in the Canarian waters. Our islands are an important source of food for the Atlantic populations, being turtles of tropical, subtropical and temperate waters of all the oceans.

The threats to this animal species range from the looting of their eggs for commercial purposes to collisions with boats. Plastics dumped into the sea, which are confused with food, or the climate change itself, can also alter the nesting behavior of the female and, therefore, the survival of the species.