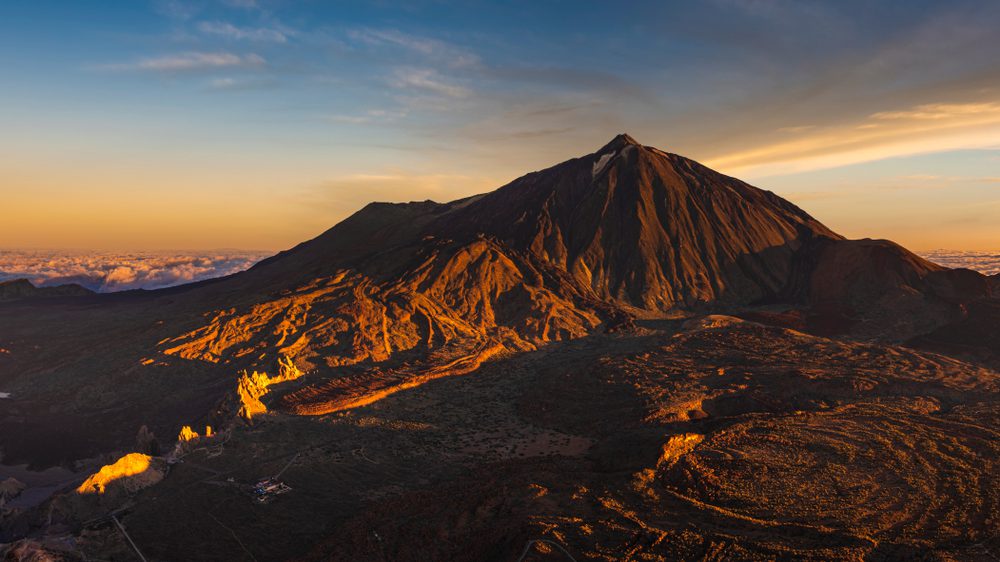 Tenerife’s unique sunsets turn places that are already special into something truly wonderful. Here are five Tenerife sunsets that look like they are taken from a work of art.

For our first sunset we head to Playa de Las Vistas, in the Arona municipality. If a day in the sunshine and the cool breeze here already sounds good, then wait until it is the magic hour  and you experience one of the best sunsets in south Tenerife.

This purple sunset is a rare event caused by an atmospheric anomaly but every sunset at Las Vistas is the cherry on the cake of a perfect beach day.

From the south to a spot in north Tenerife that is famous amongst photographers; Benijo beach. This hidden spot in remote Anaga has some of the best and most photogenic sunsets in all of Tenerife.

The beautiful rock formation called Roque de Benijo is the perfect backdrop for your Instagram stories and if you capture it at the magical sunset hour, all your friends are bound to ask you where you took such a spectacular Tenerife photo.

When the sun hides behind the lighthouse at Bajamar

Bajamar is a low-key spot north of La Laguna where locals and visitors go to swim in the natural pools or walk along the pretty shore towards the iconic lighthouse.

The lighthouse is also the focal point that allows you to have fun with your sunset photos by hiding the setting sun behind its silhouette. This dance of light and shadows adds to any photo of the beautiful sunsets and gives you images and memories that last a lifetime.

The city of many sunsets, Puerto de la Cruz

If you think you’ve seen all the best beach sunsets in Tenerife,  Puerto de la Cruz still has a few aces hidden up its sleeve. This town may be in the smallest municipality in Tenerife but it is justifiably popular with tourists thanks to its wide variety of landscapes, experiences and activities.

Puerto de la Cruz’s sunsets are a big part of its appeal. For a beach sunset like the one in our photo, head to Playa Jardín. For spectacular sunset views out over the Atlantic, you’ll see superb blues and golden hues from the Atlantic Mirage hotel.

A sunset across the Tenerife fairways

Tenerife is a golf paradise because its courses were designed by top players and because of its climate and spectacular landscapes.

The Buenavista Golf course, designed by Spanish golfing great  Severiano Ballesteros, offers unmatchable views out over the rugged northwest coast of Tenerife. From the nearby El Burgado restaurant you can watch the sun drop behind the horizon while you listen to the waves washing against  La Arena beach.

Tenerife’s most spectacular sunset, at Teide

There is no other place to end this list of Tenerife’s top sunset spots than at the Teide National Park. Whether you at the Montañas de Guajara, like our photographer, or at the peak itself, you have the island at your feet and the landscapes as the sun sets behind Spain’s highest mountain will stay with you forever.

What about you? Do you have a powerful sunset memory from Tenerife? Please join us on social media and tell us about it. We’d love to have the best collection of Tenerife sunset photos on the internet and we’re sure that your photo deserves its place in the gallery. 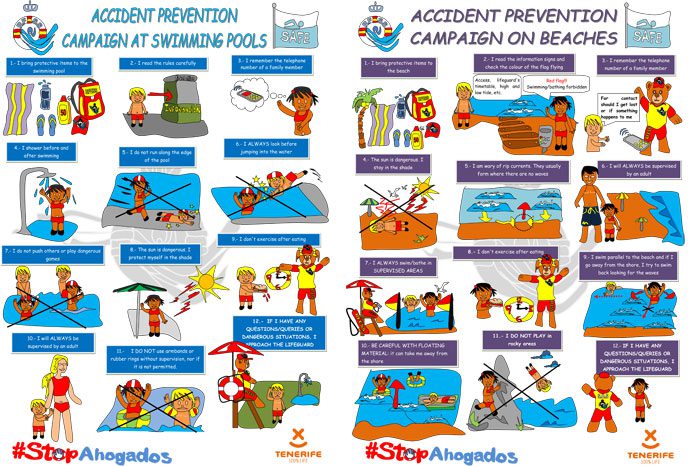 Turismo de Tenerife joins the campaign launched by the Royal Spanish Federation of Rescue and Lifesaving for the prevention of accidents in aquatic facilities and natural aquatic spaces. The initiative aims to reduce the number of drowning deaths that occur each year in Spain which is already over one hundred people in 2017. The Royal Federation, together with the European Federation and the World Federation of Rescue and Lifesaving, has launched the campaign #StopAhogados. The campaign includes informative flyers with simple tips to prevent accidents. The flyers can be downloaded at the Royal Federation’s website in the section on Prevention.

When you go to the beach with children your needs multiply; very important: fun and safety. In Tenerife we have marvellous beaches for all tastes: surfers, secluded, city,… Today we share five of the best beaches on the island to visit with children.

END_OF_DOCUMENT_TOKEN_TO_BE_REPLACED 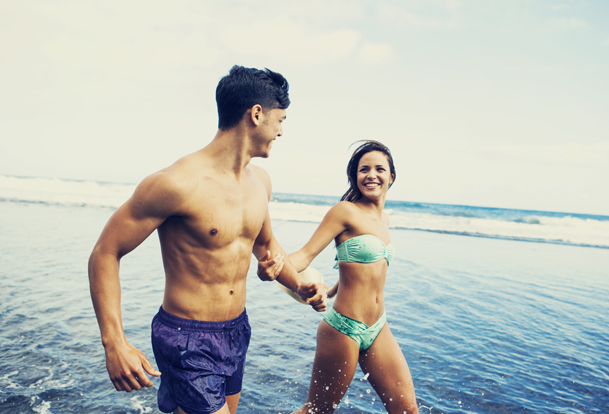 During these days nothing seems more appealing than a good dip. But, where can we go? Tenerife, which has almost 70 km of beaches, most of them Blue Flag awarded due to the quality of their water, provided services and accessibility, is the ideal place. So, our only concern will be to decide which one.

In the South beaches usually have golden sands, while those in the North are almost black.

Here you can see a list of the beaches that have been awarded with the Blue Flag: 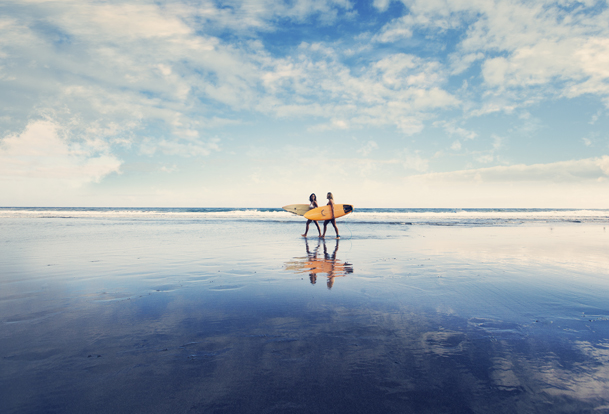 However, we can always opt for wonderful natural pools. The most popular ones are in Bajamar and Punta del Hidalgo (in La Laguna); San Juan de la Rambla (Charco de la Laja); Garachico (El Caletón) and San Miguel. 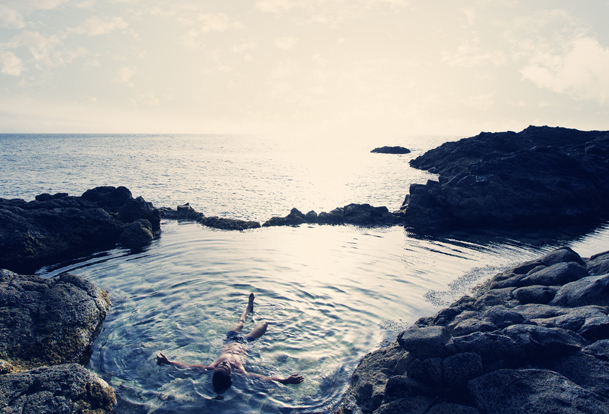 No matter what you choose, sand or natural pool, any option is great for relaxing and enjoying our fantastic coast.

But remember, it is important to measure out your sun exposure. Use sunscreen, drink plenty of fluids and, of course, look after our shores and keep them clean.

Tell us which one you finally chose!

The Environmental Education and Consumer Association (ADEAC) has finally decided what beaches are top quality in Tenerife awarding them with Blue flags.

Tenerife is happy to announce that this year nine more beaches in the island got awarded as a result of improvements and hard work.

It’s vital for Tenerife to keep the beaches in the best conditions as most of the travellers come here for beach holidays, they are precious natural resources we all need to care about.

In order to get the Blue Flag award the beaches have to meet the following chriteria listed here http://www.blueflag.org/ :

17 highly recommended beaches for all of us.

We could make several listings with our beaches, one for surfers, for divers also nudist beaches in Tenerife, so stay tunned for the next one, now you just need your accomodation, check the most recommended hotels in Tenerife at Tripadvisor, HolidayCheck, Zoover and others for the best holidays in the Canaries