In addition to what was said in the previous press conference today the latests official updates about the Tenerife fire evolution includes some good positive news.

The evolution of the fire which broke out last Sunday [15th July] in Ifonche (Adeje) is following the expected parameters, with the secured perimeter except the west side being attacked on the ground and from the air according to the Minister for Security at the Cabildo (Tenerife Government), Jose Antonio Valbuena.

Speaking at a press conference held this afternoon [19 July 2012] at the headquarters of CECOPIN in Santa Cruz, Sr. Valbuena says that fire fighters are cooling down other hotspots near the perimeter. At the southern front, the presence of smoke does not mean there is any danger of the fire starting to burn again so the residents of Vilaflor, Ifonche and Tijoco Alto, in Adeje, can return to their homes, although special care should be taken by people with respiratory problems.

Valbuena also stresses that they have already begun removing some heavy equipment in certain areas because it was no longer needed. At the moment we are making progress in the work to restore water to the Vilaflor area.

Humberto Gutierrez, head of Civil Protection of the Canary Islands Government, says “the perimeter is the same yesterday, except to the west. The fire has been contained and remains stable, also the weather conditions are good and strong winds are not foreseen.”

“Once people and property are safe, which is our priority, we shall now concentrate our full force on defending the environment. This morning helicopters flew into the affected gorges on the west side. The vegetation at these points consists of more open pine forests that allow ground crews to work safely and supported by air assets.”

The active part of the fire is progressing slowly and with good conditions for its extinction. At the same time, brigades are cooling down hot spots to prevent the fire from flaring up again and along the entire perimeter, brigades have been stationed. As for the forecast for the next few hours, the fire is static at its flanks and tail end. If we fail to stop the flames advancing to the west, the blaze will eventually die out on the slope of the lava flow, as planned. Anyway, “while there are places where the fire is still burning, we cannot say that the blaze is under control,” stresses Gutierrez.

the only roads still cut are

These will be closed for several days to facilitate the work of extinction. Finally, power has been restored to a power line affecting the supply to Vilaflor and La Escalona.

Next press conference will be tomorrow morning 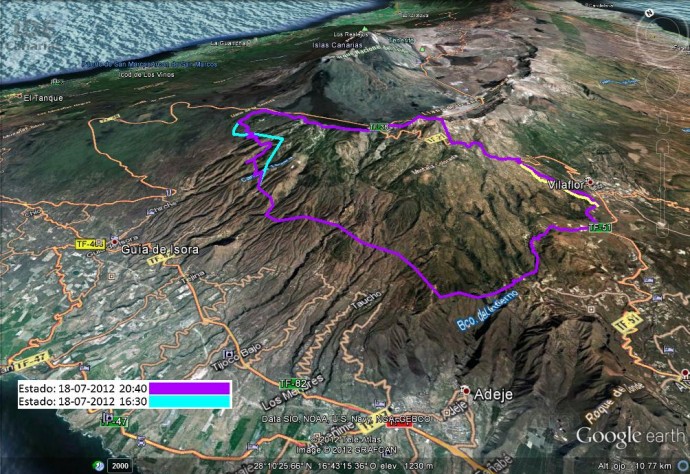 This morning the president of the Cabildo, Ricardo Melchior, has announced [Thursday 19] that the perimeter of the fire remains stable and they expect to have it under control in the coming hours. In the press conference this morning [Thursday 19], Ricardo Melchior highlighted that at the moment the news about the fire situation is good but he urges caution.  Although the situation has improved substantially the emergency “remains at level II where coordination is the responsibility of the regional government because of the type of resources still needed to extinguish the fire,” according to the Canary Islands Minister of Economy, Finance and Security, Javier Gonzalez Ortiz.

Residents of Tijoco and Vilaflor and may return home within hours, once the front that was advancing in this municipality has been stabilized. Most of the perimeter, which covers about 5,300 hectares, is stabilized even though the front that was moving along the northwest remains active, as well as various outbreaks within that area. According to the president of Tenerife, of the total surface area affected by the fire “with the first data we have compiled, we can conclude that about 1,000 hectares have been burned, of which 500 is forest.” In this sense, Melchior stresses that there is 50,000 hectares of forest in Tenerife so this fire could have affected one per cent.”

At night, the extinction work went according to plan. The eastern flank is stabilizing and the western front although still active, has progressed slowly, burning itself out when it reached areas of sparse pine forest and volcanic land, as has been forecast.

Melchior took the opportunity to congratulate all those involved so far in the fire extinguisher from the different public authorities, both technicians and those who have been in charge of the operation, as well as municipal officials, private companies have offered their support and NGOs.

According to Julio Herrero, the head of the Canary Islands Natural Environmental Service, the chief operating officer of INFOCA last night, “the prospects for extinguishing the fire are looking good. The strategy is to stabilize the active area and then proceed to control it. These are inaccessible areas and helicopter transport units need to be deployed which will be reinforced with seaplanes and the Kamov helicopter. If weather conditions remain stable, the fire will not advance to the Santiago del Teide area. In Vilaflor, all the other emergency workers and helicopters from the Emergency and Rescue Group (GES) of the Canary Islands will be deployed to ensure that the situation remains stable.

During the night the Canary Emergency Service special operation set up by the regional Ministry of Health, did not report any incidents related to the fire assists. However, the advanced medical and health care units have been deployed to Guía de Isora and will continue on standby.

Power has also been restored to a power line affecting the supply to Vilaflor and La Escalona.

The TF-583 road to Taucho is now open to traffic.

All these roads may be cut for several days to facilitate the traffic flow for vehicles involved in the firefighting operation. Roads state can be checked through the following link:

The blaze started in the Adeje highlands in the Ifonche area

Firefighters battling to control the blaze in the hills of South Tenerife have been joined by three seaplanes from Spain’s Ministry of the Environment. From 11.00 hours this morning three aircraft began operating in the Guayero Canyon area (Guía de Isora), on the right flank to prevent the fire from spreading to the Vilaflor area. There are now seven aircraft (hydroplanes and helicopters) and 500 firefighters deployed to extinguish the fire.

The president of the Government of Tenerife, Ricardo Melchior, gave the press an update on the situation this afternoon. The fire covers an area of around 2,000 hectares in the mountains but coastal resorts are not affected.

For safety reasons and also because access roads are closed, visitors and residents are advised not to attempt to visit the Teide National Park until further notice.

The authorities have imposed a ban on activities in the forests, access to recreation areas in the mountains and driving on forest tracks to prevent further fire outbreaks. There are several road closures to facilitate the movement of firefighting vehicles and the emergency services.

Apart from these restricted areas, visitors can move freely throughout the island. Both airports are operating normally.