Trail of the Senses

Come to Anaga Rural Park, where we welcome you to enjoy a very special experience, taking you to discover the Island's Monteverde greenery like you have probably never seen it before. Let your senses run free on this lovely trail. We invite you to explore the secrets of the laurel forest with all of your senses. 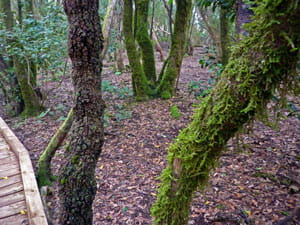 The trail lies in what was traditionally known as Las Montañas (The Mountains) in Anaga Rural Park. The park covers most of the mountain range in the north-east tip of the Island of Tenerife.

The trail sets off from La Cruz del Carmen, where the visitors centre is located. Here, you will be able to get plenty of information about this area, with its unique biodiversity not to be found anywhere else in Europe. Come and see it for yourself!

What to see and where?

The trail of the senses follows an old royal pathway that once joined the town of Anaga to the city of La Laguna. Part of that pathway has been restored for you to experience the wonders of the laurel forest with your senses: the many textures, colours, smells and sounds that we find in the heart of the forest, from Cruz del Carmen to the lookout point of Llano de los Loros.

There are three different routes to choose from so you can discover this enchanting landscape in a variety of unique sensory experiences.

Let yourself be carried away by the smell and humidity of the forest. Featuring a walkway and a small terraced area. Fully adapted for people with limited mobility or impaired senses.

2. Prepare to be amazed

You are part of the local history. This stretch of the trail is a round trip and runs partly along the old Las Montañas pathway. You will see the old paving and carved steps. This stretch also has a bridge and a suspended walkway.

3. The mysteries of the Monteverde

Prepare your senses to discover the hidden secrets of the Monteverde greenery. This too is a round trip along a gently sloping paved path with some steps. You will reach the El Llano de los Loros lookout point, and there is a suspended walkway.

The Trail of the Senses Project

The project behind the Trail of the Senses is the outcome of a collaboration between Tenerife's Tourist Board and the Island Council's Department of Sustainability, Land and the Environment (through the Anaga Rural Park Management Office).

The initiative is part of the 'Tenerife Acoge' Tourism Promotion Plan, backed by ERDF funds. 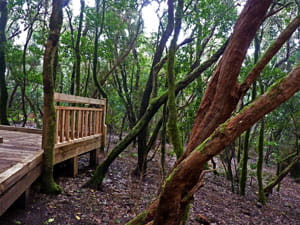 The best way of taking in the magic of the woodland is to venture into it, explore it and experience it through your own perception.

If you walk silently, concentrating on your senses, it will reward you with very special experiences.

After that, you will find it easier to appreciate how unique this ancient forest is – a millennial relic housing so many special species.

It will help you to understand the history of the place and of the path itself, which used to join the Mountains of Anaga to the City of La Laguna.

We have strived to make this trail accessible for everyone – at least part of it. It has been made suitable for people with reduced mobility, but it is really an open invitation for each one of us to contemplate and sense the forest in a special way.

The trail of the senses is an open project that seeks not only to diversify but also to improve the way we experience and understand the forest.

The idea is also to create a link between people and the work that goes on to run a piece of natural and cultural heritage such as Anaga Rural Park.

Within this first stage of the project, you can access and use the trail freely, bearing in mind a series of guidelines.

There are currently two ways to take the trail:

Soon, the Cruz del Carmen Visitors Centre and the future Service Multi-Store will allow you to access other means (booklets, themed tours, audiotours and more) to learn all about the trail of the senses and the park's natural and cultural heritage, or simply to take back with you as a souvenir.

You too can contribute to the project. You can do so by taking part in the Anaga Rural Park volunteer programme.

This gives you the chance to get involved in specific activities to preserve and recover Anaga Rural Park's heritage: restoring footpaths, traditional trails, reviving old traditions, replanting and more.

Here, you will be exposed to the humid trade winds and it can get quite cold without a jacket.

Remember, the environment around you is very delicate. Please stick to the signposted paths, don't clip or pick plants and don't damage any other natural elements.

If you do touch anything, do so carefully. Take any rubbish with you, even organic waste.

Although the trail is short, we advise you to go with at least one other person, wear suitable hiking gear and take a hat, sunscreen and a raincoat in case you need them. If the ground is damp, you may find a walking stick useful. Make sure you take water with you as well.

The site of Cruz del Carmen This was a meeting and resting point where various pathways crossed. This is where tradesmen would come to take the Royal Pathway of Los Loros down to La Laguna to sell their goods. It was also a stopping place for people carrying the bodies of the deceased from the mountains to the cemetery in La Laguna.

It also made a great place for villagers to exchange products. The people of Las Carboneras would head up to La Cruz del Carmen on Wednesdays and Sundays, and queues of people lined the paths carrying coal, spuds, cabbages, the local variety of courgette and other goods.

A cross was erected at this intersection in 1836 to bless walkers, and in the late 19th century a small chapel was built where the cross once stood. The cross can still be seen on the right-hand side of the chapel, near the entrance. In 1961, another chapel was built with the help of a local forest ranger, who promised people passing the area a bundle of firewood for every stone they brought.

That chapel was then extended to become the building we see today, which is devoted to La Virgen del Carmen, featuring a sculpture of scarce artistic value.

It was built in 1934 beside the La Jardina lookout point, once the road up from La Laguna to Cruz del Carmen was laid.

It was built in the form of a cobbled semi-circle with a concrete banister. Around the edge is a closed semi-circular pergola with eight columns. The lookout point stands on high and can be reached by climbing some steps. Towards the end of 2010, a ramp was also built so that people with reduced mobility could access it.

Weather permitting, the lookout point affords stunning views over the lowlands of La Laguna, El Teide, the Island's central mountain ridge, and the slopes to the north and south of the island.

The Cruz del Carmen Visitors Centre was promoted by the Canarian Government and opened in 1995. It has an entrance hall with a reception and help desk, a main corridor and an exhibition room displaying information about Anaga's natural and cultural wealth.

The Centre stands in the General Use Area of Cruz del Carmen, which is the main point of entrance to Anaga Rural Park.

The building was designed to blend in with its surroundings, set against the woodland, within a Public Use Forest belonging to the City Council of La Laguna.

Its outer walls are clad with stone. It has been made accessible for everyone, both outside and in.

The Monteverde greenery of the Canary Islands

Traditionally, the term used to refer to this type of woodland that thrived in the Atlantic archipelagos of the Canary Islands, Madeira and the Azores was "laurisilva", meaning laurel forest in Latin. Today, however, the term "monteverde" has gained ground.

Hundreds of thousands of years ago, this type of woodland populated much of the Mediterranean Basin, but disappeared due to glaciation and desertification. The weather conditions on the Atlantic Islands were milder and the dominant trade winds kept humidity levels high, which allowed these lush forests to survive in certain mountain areas. Today they are living relics of the vegetation of another era.

The Monteverde is a misty, subtropical forest that grows in warm, humid areas with no frost. It is populated by large trees and climbers with similar leaves to those of a laurel tree (broad, stiff, lanceolate, evergreen leaves), which gave rise to its classic name "laurisilva".

These forests are renowned for allowing little light to shine through. Most of the species have adapted to that shortage of light, which is why their leaves are such a deep green colour.

Each of those species has different requirements. Some are pioneers, less demanding and faster-growing (such as the Macaronesian heath, tree heath and yews). Once settled, they create the conditions needed by other species, which thrive when that ecosystem has evolved.

Others are more demanding but grow bigger, meaning they eventually take over the pioneers and replace them, since the former need more light.

The most common trees in an evolved Monteverde forest include laurels, Portugal laurels and wild orange trees.