Crouching silently in the bushes, you wait eagerly for something to happen – and it does! Suddenly, she lands just a few yards in front of you. Her feathers are brighter and more colourful than you had imagined; her movements are a mixture of precision and grace. Her song cuts through the forest silence, like heavenly music to your ears. You point your camera, which has now become an extension of your body, and switch to super-fast shutter speed in order to capture every moment. The wonderful world of birds is your paradise.

The Island is known to be home to some 70 species of breeding birds, several of which are endemic. There are a total of 21 perfect birding spots dotted all over the Island, in the mountains, on the coast or in between.

The Protected Landscape of Las Lagunetas

The town of La Orotava

Common buzzard
(Buteo buteo insularum)
The common buzzard feeds on reptiles, insects and small mammals such as mice, often hunting over bushland and farmland areas. Generally speaking, it is easy to spot all year round by simply visiting the Island's mountain areas and ravines, which are its natural habitats.

Scopoli's shearwater
(Calonectris diomedea)
Scopoli's shearwaters emit an unmistakable shriek in their breeding areas, though they are surprisingly silent over open sea. This marine bird can be seen on the Island from springtime to autumn, and a great place to watch it is from Tenerife's headland areas, especially in the evening. 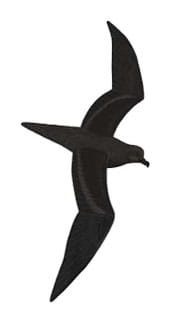 Bulwer's petrel
(Bulweria bulwerii)
The only place in Spain where this bird lives is the Canary Islands, and Tenerife is home to the greatest number, with some 400 pairs in all. They spend most of their time fishing out at sea (especially for plankton) and they only come close to land to nest. They breed on rocky crags and are most active by night in their breeding areas. Their call is similar to that of a small dog. 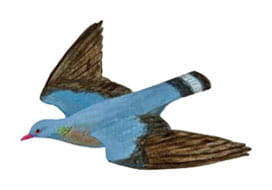 Bolle's pigeon
(Columba bollii)
This species is endemic to the Canaries and lives in the laurel forests. They feed on the fruit and berries of the Macaronesian heath, laurels, small-leafed holly, strawberry trees and others, and they always nest in trees. They are grey in colour with wine-red touches on their chest and green and pink hues on their neck. 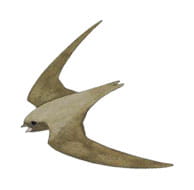 Plain swift
(Apus unicolor)
The plain swift is easy to spot for its crossbow-like shape and its high-pitched cry. They spend much of their time flying around in flocks and only land to get in or out of their nests. They are able to sleep whilst in full flight. Swifts are migratory birds, and they fly over from Africa every year in spring and summer. As well as ravines, their favourite breeding places are abandoned houses and buildings in urban areas. 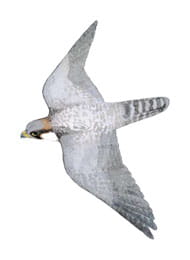 Barbary falcon
(Falco peregrinus pelegrinoides)
This is another species that you will find nowhere in Spain but the Canary Islands. They originally came from North America, though some specimens have been traced as far away as Egypt and Mongolia. Their favourite breeding areas are seaside cliffs and scarcely vegetated ravines. With a wingspan of up to 1 m (40 inches), they feed on pigeons and other small birds. 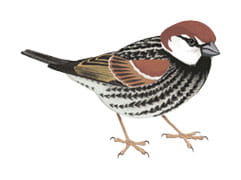 Willow sparrow
(Passer hispaniolensis)
This naturally gregarious bird nests in small holes in the trees, as well as on posts and turrets. They are vegetarian eaters and are very noisy, making them audible from hundreds of yards away. They have always been numerous on the Island, though they have become less commonly seen in recent years. The best places to spot them are towns, as well as city parks and gardens. 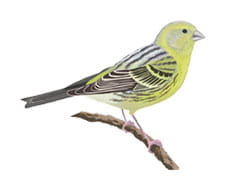 Canary bird
(Serinus canaria)
This is one of the symbols of the Canary Islands, it was originally only found living here, in Madeira and in the Azores. It has brownish hues on the top, with green and yellow colours on the wings and face. It is often seen in large flocks searching for seeds in the forests and farmland. The domestic species of the wild Canary bird is the world's most popular pet.

Canary Islands Chiffchaff
(Phylloscopus canariensis)
This little bird lives in more or less populated woodland areas and laurel forests, but it is equally happy to dwell in farmland and gardens. They feed mostly on insects, fruit and pollen. They can often be seen on the coast and on the peaks. 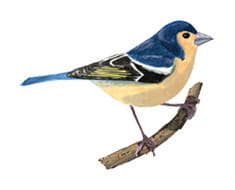 Common chaffinch
(Fringilla coelebs)
There are 16 subspecies of chaffinch in the world, and Tenerife is home to one of the three that inhabit the Canary Islands. They can often be spotted flying around the laurel forests or humid pine forests. They feed on seeds, though younger chaffinches also eat insects. 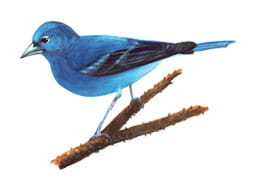 Tenerife blue chaffinch
(Fringilla teydea)
Their blue plumage is stunning during the mating season, turning to a more browny-blue tone during the rest of the year. This species is endemic to the Canary Islands and inhabits Tenerife's pine forests (it can be seen in the forests of Teno, Aguamansa, Boca Tauce, Arico and other woodland areas). It eats seeds from pine trees, laburnum and broom, as well as larvae from pine bark. 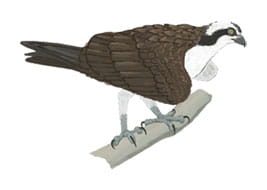 Osprey or fish eagle
(Pandion haliaetus)
This bird is closely bound to the marine habitat, nesting on islets and cliffs such as those in Teno, which is one of its favourite spots. It feeds only on fish. It is becoming increasingly difficult to glimpse as it is one of the rarest birds of prey in Tenerife. 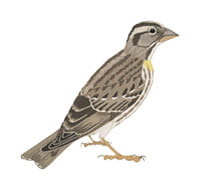 Rock sparrow
(Petronia petronia)
The little yellow marking in the middle of its neck is one of its distinctive traits, together with its shrill, nervous cry. It is elusive and wary during the breeding season, but makes a slightly bolder appearance in autumn and winter. To catch a glimpse of it, you will need to venture out into the traditional farmland areas of the Teno and Adeje mountain ranges. 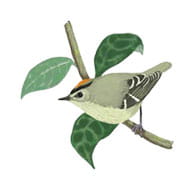 Tenerife goldcrest
(Regulus teneriffae)
Measuring just 9 cm (3.5 inches) long, this is the smallest of the birds that breed in Tenerife and it dwells in the pine forests. It feeds on invertebrates that it finds in the branches of the trees and bushes. 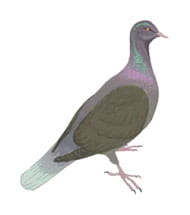 Laurel pigeon
(Columba junoniae)
Despite the fact that the population of laurel pigeons has gradually waned, they can still be seen mostly in ravines in the north of the Island and in forests of Macaronesian heath and tree heath or laurel forest. 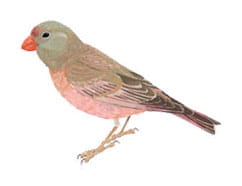 Trumpeter finch
(Bucanetes githagineus)
This critically endangered species is most often found on the hillsides, in the ravines and in rocky landscapes. It has a sizeable head and a short beak that turns red during the mating season. 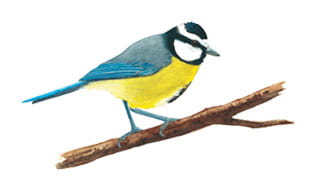 African blue tit
(Parus teneriffae)
The top of its head is cobalt blue, while its wings and tail have an indigo tinge. This strikes a contrast with the green colour of its back and the yellow hues underneath. This species can only be found in the Canary Islands and the north of Africa. They like to visit the broom landscapes of Mount Teide National Park, where they hunt for small invertebrates. 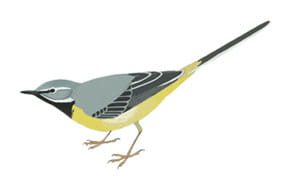 Grey wagtail
(Motacilla cinerea canariensis)
Its streamlined body ends with a characteristic wagging tail, which it uses to make sudden twists and turns in mid-flight. It feeds on spiders, insects and crustaceans. Pools, irrigation channels and farm areas are some its favourite places to dwell. 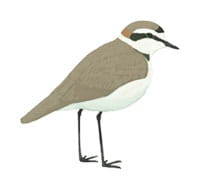 Kentish plover
(Charadrius alexandrinus)
It is frequently found on beaches, salt plains and coastal areas. It roosts near water in small hollows surrounded by pebbles, seaweed and pieces of shells. In Tenerife, it can be seen mostly on the coast of El Médano and Montaña Roja, though in winter you might also find some elsewhere on the Island. 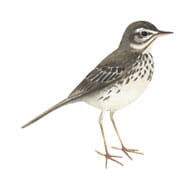 Betherlot's pipits
(Anthus bethelotii)
When threatened, this bird rarely takes flight to escape; it prefers to run for cover making intermittent stops along the way. This species is endemic to Macaronesia. It can be spotted from sea level all the way up to altitudes of 3,000 m (9,850 ft) in areas with few trees and little vegetation. It is not unusual to encounter a Betherlot's pippit on the ground on a pathway. They eat grasshoppers and caterpillars.

Great spotted woodpecker
(Dendrocopus major)
To feed, it looks for insects and especially larvae beneath tree bark. It bores into all kinds of wood and is capable of pecking through it easily thanks to its powerful beak. There are two subspecies of woodpecker in Tenerife and the Canary Islands.

Specialists in observation of whales, seabirds and other marine fauna in the Special Conseration Area of the south of Tenerife.Private trips paid by…