Route 1 starts at sea level in the town of Garachico and takes cyclists on a steep and mountainous 54 km (33.55 mile) ride. The average gradient is 6% and the route journeys up to 1,107 m (3,632 ft) above sea level. The route travels along the north and west coast of the Island.

The first third of the way is a constant ascent from the start to the highest point. This is followed by uphill and downhill stretches with varying gradients. The last third is a constant descent, with intermediate gradients at first and very gentle slopes towards the end.

The route is very winding for the first two thirds, but somewhat straighter for the last stint down to Garachico.

The route sets off from the west of Garachico, on the TF-421 road. The first few miles are a winding ascent up the steep mountainside. After 8 km (5 miles), the TF-421 meets the TF-82, where you should turn right towards the town of El Tanque, which you will come to at km 10. As you exit the town, follow the same road uphill, which will take you past the hamlets of Ruigómez and Erjos. At km 19 (mile 11.8), you will come to the highest point on your journey: the Erjos mountain pass at1,107 m (3,632 ft) high. You will then begin your descent down the same road, the TF-82, all the way to the town of Santiago del Teide at km 22 (mile 13.7).

As soon as you enter the town, the route changes direction towards the right along the TF-436. After a one kilometre ascent, you will reach the peak, where there is a small lookout point affording spectacular views over the cliffs on the west side of the Island.

From that point on, get ready for a steep descent. Be careful with your brakes because the slope gets as steep as 20%.  You will reach the village of Masca at km 28 (mile 17.4) of your route. Stick to the TF-436, which will take you past the Hilda lookout point and the villages of Los Carrizales, Las Portelas and El Palmar.

Continue your descent and you will reach the town of Buenavista del Norte at km 43 (mile 26.7). Here, the route turns right onto the TF-42 which runs from west to east. From now on, the route is more gentle but can be more dangerous as the traffic is heavier than on the rest of the journey. Finally, you will arrive back at Garachico which is the end point of your 54 km (33.55 miles) ride. 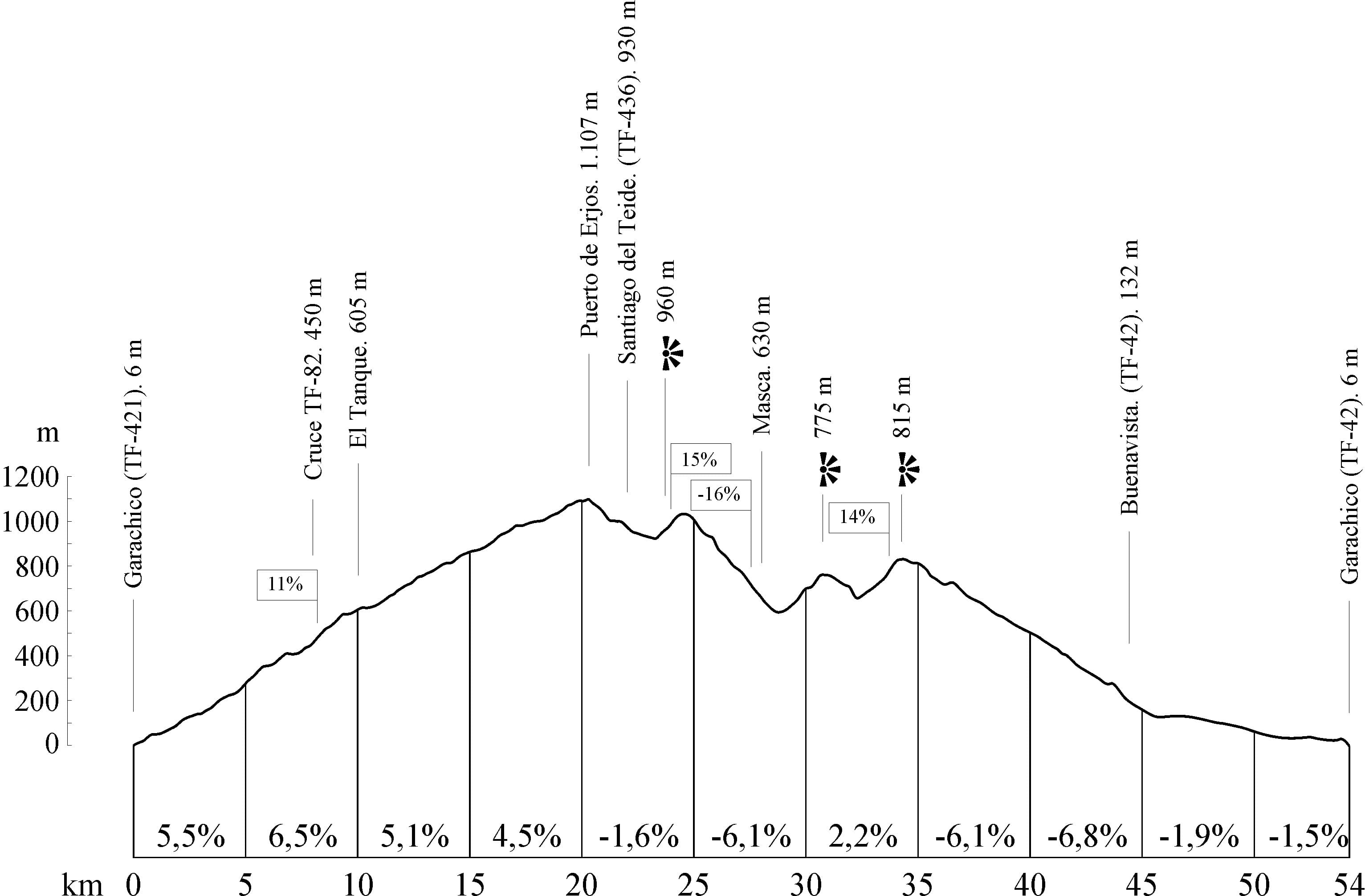 Maximum: 27º
Minimum: 21º
Garachico. Mostly clear skies, but more cloud cover will develop on Monday morning. In the afternoon the sky will be covered by high and middle clouds. At night, clouding over. Temperatures will remain unchanged.
Next days weather
Bring me

A travel agency devoted to Active Tourism in the Canaries which has Official Tourist and Hill-Walking Guides. They specialise in the individual…

Product: Tenerife No Limits Free Motion is more than just a bike rental shop, it's a bike centre dedicated to making the cycling experience of lovers…

Surf Center Playa Sur is a centre specialising in water sports such as windsurfing and kitesurfing. Since 1983, it has been located in El Médano, an…

The Observación de las Estrellas invites you to observe the firmament, aided by a wide-ranging telescope, in the unique conditions that Tenerife has…